Their father was a herbalist, not one of those fake ones who perform tricks and play Russian roulette with people’s lives

He was the real deal

The type that inherited powers and yet travel often to many villages and towns to learn from other herbalists and sorcerers  and collect their books and/or knowledge quickening charms in order to grow in the business.

For their father, knowledge was power and power was money

One day, their father told her he was traveling to Ekiti to see some people who could show him the way out of poverty

According to the woman, the day their father returned from Ekiti, their child developed a strange ailment and within a week became twisted inside out

Their father does not talk about the episode at all

Although the woman had remarried and had other children for another man, she didn’t keep away from their father and family for reasons best known to her

Their father was known among the initiates and his customers as Ekun (The Tiger), this was due to his spiritual exploits which were obvious for all to see

Their father considered his work as legitimate and something to be proud of right from childhood, all the children and his father’s wives were exposed to their father’s works

Their father as their teacher and coach

They were his production line

He taught them how to differentiate one leaf or plant from the other, one animal or insect from the other and how to prepare all the materials for “medicine”, concoction, sacrifice and protection

As they grew older, their father systematically exposed them to more

When he was nine years old, he was exposed to his first serious bout of seeing beyond the physical realm.

His father’s mouth was never silent

He knew his father was always seeing things

He got some rheum off his dog’s eyes and put it on his eyes in the evening, he had nightmares all night

When he woke up in the morning, the nightmares didn’t go away

He had almost run mad before he confessed what he did

His father wasn’t mad with him

In fact, the next day, his father took him into the power room, sat him down and asked him to describe the things he saw

His father told him they were just being envious

He was the only one allowed to enter his father’s power room to sweep, clean and prepare the place before his father begins his daily consultations from that day

He was the warlock, the one the demons favoured far above the rest!

His father’s clients came from all over

The lazy poor aiming to get rich quick

The hardworking poor praying for favor

The average hoping to breakout of obscurity

The afflicted, the ambitious, politicians, policemen and soldiers seeking protection from untimely death in the line of duty

Women looking for children, husbands, jobs, enchanted substance to hypnotize and fleece men of their hard-earned money and so on

They came from all walks of life

His father told him specialization was a limitation

He started learning the chants and incantations

Curiously, the only other person awakened to partake of the ritual was his 12 years old sister

The first daughter of his father’s third wife

The woman was known to be a witch and given that she had not done any extra-mundane feat like him, he wondered why she was chosen until their father began to say some incantations on the eggs they were being fed

They both did When they were done, his father told the two of them that they had been chosen to work as partners as they learn the work from him

They swore an oath to it

From that day, their father started giving them tasks to accomplish

It was one of the reasons he married a witch, so that his negotiations with other power brokers can be easier

His step-sister was supposed to be his leverage

Everything was going smoothly

He was respected, even feared by many

They couldn’t get anything free

In the dream, she saw herself and her brother having sex in a pool of blood

She had the dream several times

She asked her mother what it meant

That year she gained admission to one of the polytechnics and went to shop for clothes, beddings and other things that she would take to school

They went shopping on a Friday morning

The church was holding a vigil

That night, his sister could not sleep

So she got out of bed and dressed up

The next thing she remembered was walking into the church

The Brother in Jeans and T-shirt was ministering

When his sister returned home, everything had changed

She was singing and jumping everywhere like a bozo

Everything she touched got contaminated

A sorcerer is no witch

He had seen Christians before, several Christians

Many of them, even pastors, consulted his father but he had never seen anybody who could do what was done to his sister

Take away her powers and leave her sane and bubbling about as if she had no care in the world?

He felt he needed to meet the pastor, know what he was really about

Find out how deep he was spiritually

Everything his father had was fast turning to dust

The stroke killed his father’s business

The conversion of his sister truncated his father’s handover plans

He called his cousin in Arepo and made some inquiries

He called and got an appointment

He did many protective charms and incantations

He also took along deadly rings and charmed belts

They met on a Wednesday at the office of the Brother in Jeans and T-shirt in Magodo, Lagos

He couldn’t explain it

The incantations faded, his malicious intention faded, he just cried

Afterward, he fell on his knees and asked the Brother in Jeans and T-shirt to pray for him

The brother in Jeans and T-shirt told him idols are nothing in the Kingdom of God’s own son, Jesus Christ and the same goes for charms, incantations, spells and so on

The Bible says “Nothing shall by any means hurt you”

PS: I was told there was a cake maker who follows my stories and believes she can use diabolical powers to see the
future

There is a booby trap in this story for her

I said it over the piece as i wrote it

Nothing of such works for you again

It shall remain forever as i have decreed

Jesus loves you and wants to empower you

Come to Him today

GSW’s notes: Christians should only discuss one power

That is the power of the Holy Spirit

The brother and sister whose story

These were vessels deliberately prepared for darkness and yet hijacked by the Holy Spirit without as much as a whimper from hell!

There is no other power in heaven and on earth and underneath the earth apart from the Name of JESUS!

Taming The Warlock was written by Gbenga Samuel-Wemimo 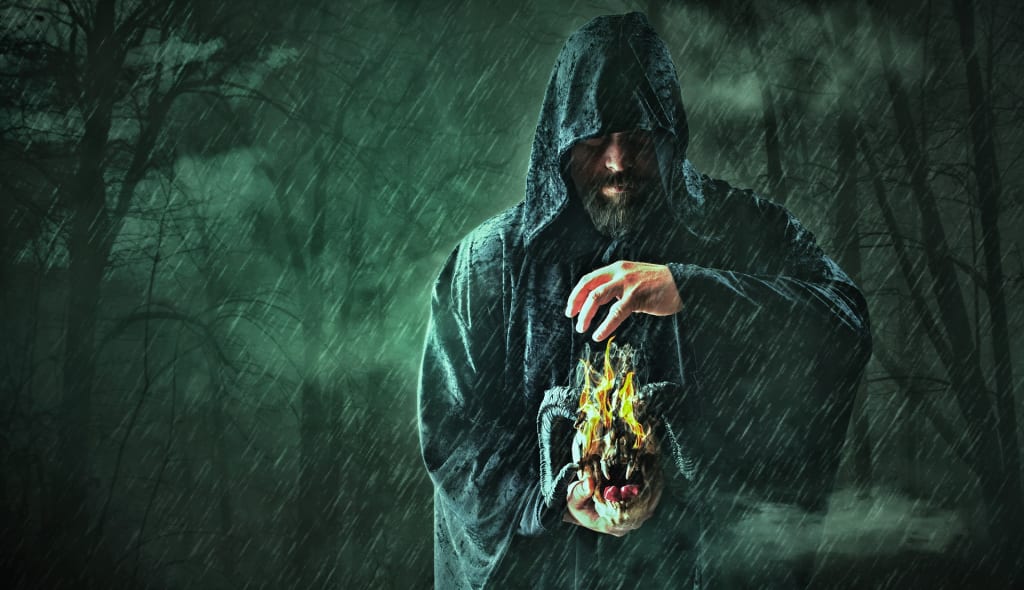